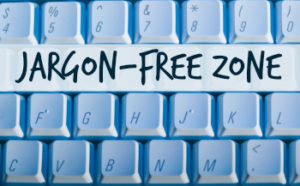 It’s kind of a love-hate thing. My feelings about The Blacklist, that is.

If you haven’t seen the NBC crime drama, the basic premise is a most-wanted criminal turns himself in to the FBI and offers to help them track down a “blacklist” of elusive criminals they have a mutual interest in eliminating.

What I love: James Spader. I’m a long-time fan and he’s done it again: Created an intriguing and unlikeable character who can’t be trusted – and who you can’t help rooting for.

What I hate: The over-the-top creepiness of the bad guys and gruesomeness of the crimes. (I’ve stopped watching the show near bedtime.)

I’ve got a similar love-hate thing with jargon. Business jargon, that is.

What I love: Jargon is like shorthand, perfect for those days when a project deadline looms and I’m feeling rushed or lazy.

What I hate: It’s as far from writing in an “authentic” voice as you can get.

If you’re not sure what I mean, here’s a good example from a Harvard Business Review post by Bryan A. Garner: “It’s mission-critical to be plain-spoken, whether you’re trying to be best-of-breed at outside-the-box thinking or simply incentivizing colleagues to achieve a paradigm shift in core-performance value-adds.”

Garner’s post includes a “Bizspeak Blacklist,” dozens of words and phrases that he says should “never find their way into print.” I cringed at how many of these have shown up in my work – and how phony they sound when pulled out of context. Other online lists included jargon I’ve never heard before, like “tiger team,” “swim lane,” and “over the wall.”

Writing like a person – not an institution – isn’t easy, especially if you or your clients work in an industry rife with buzzwords, clichés and acronyms. But effective communication is all about using clear, simple language to get to the point. Piling on the clichés can be confusing, pretentious, even meaningless. Instead of sounding smart, our writing ends up sounding like – well – a big pile of clichés.

So the next time you catch yourself writing, “Let’s take this offline”, try the far more real, “Let’s talk about this later.” And surely there are suitable replacements for the likes of “paradigm shift,” “core competency,” “buy-in,” “synergy,” “state-of-the-art,” and one of my personal pet peeves, “at the end of the day.”

James Spader wouldn’t be caught dead telling his FBI pals to “think outside the box.” He’d just tell them to think.

I’ve been telling stories about people, places and businesses my entire career. As Chief Storyteller at Open Heart Creative, I’m privileged to share my story in the process of helping other business owners share theirs.
– Donna Gould

Listen to Your Heart Finding Your Voice
Scroll to top